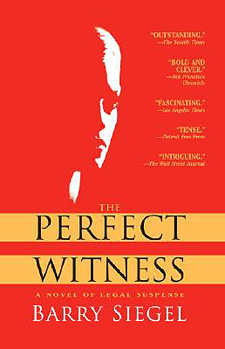 Book One in the Chumash County Series

They used to be partners—Greg Monarch and Ira Sullivan, a couple of do-good lawyers in an isolated, fog-bound central California coastal town. But it all went bad for Ira. Bad enough that he wakes up in jail one day staring at a death sentence for murder. Only Greg Monarch has a prayer of getting him off—if he's willing to cross certain ethical lines.

Just how far should he go to save his former partner? Layer by layer, Greg peels back a tissue of lies—and at the rotten core he comes to Sandy Polson, a self-possessed beauty who can look you deep in the eyes and make you believe anything. Sandy says she was with Ira the night of the murder, says she saw the whole thing. The prosecution believes she's the perfect witness. But what if Monarch could persuade Sandy to tell the truth? Wouldn't Sandy then become the perfect witness for the defense?

"Richly atmospheric...He does a splendid job of making you feel the sadness of thwarted dreams and the isolated beauty of the mid-California coastal town where the Mexican past blends with the cappuccino present. The Perfect Witness is tense, well written, with deeply engaging characters and a striking sense of place."
—Detroit Free Press

"Often the best courtroom thrillers take us beyond the usual murder case to grapple with larger and more complex matters... Siegel perfectly captures the kind of webbed connections between politics and law enforcement that can paralyze the workings of constitutional protections...It's a story in which triumph may come from failure, and losers get a second chance."
—San Francisco Chronicle

"Barry Siegel is a writer's writer. His scenes and characters never fail to fire the imagination and tug at the emotions. With Barry Siegel you don't read a story. You feel it. You live it. And you always want more."
—Michael Connelly, author of the New York Times bestsellers The Poet and Blood Work

"The Perfect Witness is a clever and entertaining legal thriller that is as much about the moral and ethical dilemmas that confront American criminal defense lawyers as it is about murder. Barry Siegel keeps the plot moving with twists and surprises all the way to the end."
—Phillip Margolin, author of the New York Times bestseller Gone, But Not Forgotten

"Every page is alive with the feel of reality—from the lies and betrayals of the court system to the beauties of the California central coast and its entrancing past and present... Siegel's story [has] the feel of Steinbeck's Monterey...I hope this is the first in a long series."
—Darcy O'Brien, winner of the 1997 Edgar Allan Poe Award

"Gripping, emotionally charged...Siegel conveys a strong sense of place, and he convincingly captures the conflict between flagging idealism and hard reality in his protagonist...The plot twists are genuinely surprising...[A] compelling debut."
—Publishers Weekly

"A dogged defense attorney's running battle with an unimpeachable prosecution witness raises disturbing questions about the nature of the judicial process in this first novel...Not a whodunit, but a sharp, unsparing exploration of the conflicts between justice and advocacy in the adversarial system." Starred Review
—Kirkus Reviews

"Intriguing and shocking...An electrifying debut novel in the legal thriller tradition of Scott Turow and Philip Friedman...A beautifully crafted sense of place surrounds prizewinning journalist and nonfiction writer Barry Siegel's debut thriller in a cocoon of credibility, adding weight to a strong story...As sharp and surprising as the book's resolution is, it's the image of the fading, changing town of La Graciosa that will stay in your memory."
—www.amazon.com

"Move over Scott Turow and John Grisham! The Perfect Witness may be the perfect courtroom thriller-taut, suspenseful, relentlessly paced, and written with the special authority of a veteran investigator who knows the territory backwards and forwards."
—Jack Olsen, author of Hastened to the Grave: The Gypsy Murder Investigation

"The Perfect Witness is at its heart a classic courtroom tale, but it's also something more...Mr. Siegel has a good eye for detail and a nice touch with legal matters."
—The Washington Times

"An outstanding debut...The very involved plot turns on the testimony of a pathological liar who is the prosecution's primary witness."
—Mystery Lovers Bookshop

"An engrossing legal thriller with all the twists and surprises of the genre."
—The Register Herald (Beckley, WV)

"A cliffhanger of a story...A haunting thriller...with artfully drawn characters caught up in a tangle that pulls even tighter as the story progresses."
—The Seattle Times

"Intricately plotted...It's not often one encounters a fictional character as memorable as Sandy Polson...Monarch's courtroom duels with the disturbed but extremely devious Polson are fascinating."
—The Los Angeles Times