"Barry Siegel is a writer's writer. His scenes and characters never fail to fire
the imagination and tug at the emotions. With Barry Siegel you don't read a story.
You feel it. You live it. And you always want more."
—Michael Connelly 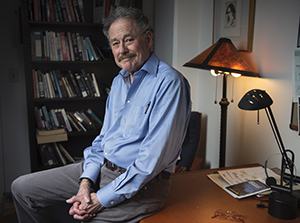 
Barry Siegel, a Pulitzer Prize winning former national correspondent for the Los Angeles Times, directs the literary journalism program at UC Irvine where he is a professor of English. He is the author of eight books, including five volumes of narrative nonfiction and three novels set in imaginary Chumash County on the central coast of California.

He began at the Los Angeles Times in 1976 as a staff writer in the feature section. In 1980 he became a roving national correspondent, pursuing a self-created assignment that involved no fixed beat, no relation to breaking news, and no time or space constraints. The unconventional narratives he wrote for The Times, many about communities struggling with moral dilemmas, took him to all corners of the nation and beyond—from the dirt-poor towns of Donalsonville and Willacoochee in Georgia to Callao, Peru, and Rio Frio, Costa Rica; from Charleston, South Carolina to the Amish region of southern Indiana; from New Orleans to the Pacific Northwest, the gulf coast of Florida, the upper peninsula of Michigan and the farm country of southern Minneapolis. His articles have garnered dozens of honors, including two PEN Center USA West Literary Awards in Journalism, the Livingston Award for Young Journalists and the American Bar Association Silver Gavel Award. He won the 2002 Pulitzer Prize for Feature Writing for an article about a Utah man charged with negligence in the death of his son, and the judge who heard his case.

The themes of Barry Siegel's fiction echo those of his journalism: In Chumash County as in the pages of the Los Angeles Times and his nonfiction books, his characters resolutely wrestle with the need to make choices and take action in ambiguous situations where there is no clearly right answer. His novels' plots incorporate much of what he witnessed while traveling the country for the Times. They are acts of imagination, but they rise from the type of events that unfold constantly in the American judicial system.