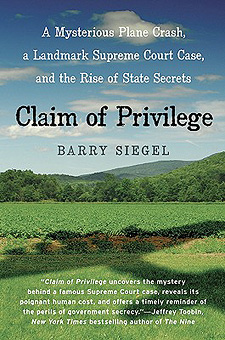 A Mysterious Plane Crash, A Landmark Supreme Court Case, and the Rise of State Secrets

On October 6, 1948, the dawn of the Cold War, a U.S. Air Force B-29 Superfortress fell from the sky over Waycross, Georgia, killing, among others, three civilian engineers. Pulitzer-Prize winning author Barry Siegel's narrative—equal parts history, legal drama and expose—examines the causes and consequences of that tragic day.

Claim of Privilege weaves multiple stories: The unexplained crash, the three young widows' devastating loss, the lawsuit those widows filed against the U.S. government, and the landmark U.S. Supreme Court decision whose impact is felt today more than ever. At the heart of the chronicle is a decades-long search for the truth. The widows and their children kept asking: What happened above Waycross? What happened—and why?

The three engineers were aboard the doomed B-29 to test secret navigational equipment. When their wives sued in June 1949, the Air Force refused to hand over its accident report and witness statements, claiming the documents contained classified information that—given Cold War dangers—would threaten national security. The widows continued to fight, their case finally reaching the Supreme Court. In March 1953, the Court sided with the Air Force in U.S. v Reynolds. This landmark decision formally recognized the state secrets privilege—a privilege that would enable federal agencies to conceal conduct, withhold documents and block civil litigation in the name of national security.

Over the next fifty years, the families of those who died in the crash never stopped wondering what had happened in that B-29. Then, in 2000, came their stunning discovery: The documents that three widows had vainly sought half a century before were now declassified and available. They ordered a set and began to read. What they read shocked and dismayed them. They determined to take on the government once more—and to ask the Supreme Court to remedy its own fifty-year-old error.

Barry Siegel places this story against the backdrop of the early Cold War days, an era whose political climate resonates today. He draws connections between the apocalyptic anxieties of that time and our current age of terrorism and government secrecy. He makes clear the dangerous consequences in both eras—the violation of civil liberties and the abuse of Constitutional protections. By evoking the past, Claim of Privilege illuminates the present. Here is a mesmerizing narrative that indicts what our government is able to do in the name of national security.

"In Claim of Privilege, Pulitzer-Prize-winning reporter Barry Siegel shakes us out of complacency. Past court decisions, he vividly reminds us, sometimes bubble up from a swamp of unexamined lies and exaggerated fears...Siegel tells this story with thorough, appropriate emphasis on the human element...The real power behind Siegel's book, however, comes from the contemporary backdrop against which we read it...Siegel cites a number of examples of how the Bush administration has invoked Reynolds to get lawsuits thrown out or to limit the rights of accused terrorists. Siegel's criticism, though largely implicit, is unmistakable..."
—Los Angeles Times Book Review (read the full review)

"Claim of Privilege, by Barry Siegel, is an important and exhaustive look at the Reynolds case, and it conclusively demonstrates that the state secrets privilege was built on a lie...Mr. Siegel, who won a Pulitzer Prize for feature writing at The Los Angeles Times in 2002, has written a work of narrative journalism, rich in detail...He is an exemplary reporter, and has seemingly discovered all that can be known about the flight, the men aboard, the people they left behind and the Reynolds case itself...When Mr. Siegel has good material to work with, he is a master. His portrait of Charles J. Biddle, the lawyer who brought the Reynolds case, is exceptionally vivid."
—Adam Liptak, New York Times (read the full review)

"Outstanding...excellent...especially welcome...Siegel brings out the dramatic nature of the B-29 accident, the withholding of the accident report, the rediscovery of it, and judicial disregard for it."
—Gary Wills, The New York Review of Books (read the full review in pdf)

"Barry Siegel's Claim of Privilege uncovers the mystery behind a famous Supreme Court case, reveals its poignant human cost, and offers a timely reminder of the perils of government secrecy."
—Jeffery Toobin, New York Times best-selling author of The Nine: Inside the Secret World of the Supreme Court

"Meticulously researched and compulsively readable, Claim of Privilege lays bare a government coverup more than fifty years ago that resonates today. Anyone who wonders how we became a nation at the mercy of an administration that can order wiretaps and brutal interrogation techniques with impunity needs to read this important work of literary reportage."
—Gay Talese

"There's something distinctly (and thankfully) old-fashioned in the literary journalism practiced by Siegel...In his latest title, he turns his gimlet eye on a 60-year-old imbroglio: the 1948 crash of a B-29 Superfortress that killed three civilian engineers, the 1949 lawsuit brought by their respective widows, the Air Force cover-up that ensued, and the landmark 1953 Supreme Court ruling (U.S. v. Reynolds) that established the state-secrets privilege, used ever since for all manner of governmental prerogatives, from document concealment to 'enemy combatant' detention to civil-liberties erosion. Siegel here employs all his estimable powers—deep reportage, meticulous methodology, shrewd analysis—in pursuit of the story, establishing in the process an incontrovertible legal continuum from the early Cold War era to the post-9/11 one. The result is revelatory."
—The Atlantic

"Siegel, who won a Pulitzer in 2002 as a reporter for the Los Angeles Times, delivers legal drama at its most vivid and maddening."
—Los Angeles Magazine

"Siegel has written an excellent book, as fast-paced and engrossing as a novel but telling a true story...Using U.S. v Reynolds and its fascinating history as a center point, Siegel discusses the state secrets privilege and its applications up to the present. The book's memorable characters and compelling subject make it essential reading."
—Library Journal

"Pulitzer Prize-winning journalist Siegel ably recounts the case, a scandal and cover-up with grave constitutional implications...His is an engrossing exposition of the facts and legal issues in the case, which produced a disturbing legacy of government secrecy and misconduct still very much alive."
—Publishers Weekly

"Siegel unwinds the story like a mystery novel, with vivid writing that deftly illuminates the legal principles without unnecessary legal jargon."
—Seattle Times

"Siegel thoroughly exposes how a landmark case...was based on a faulty argument by the government. A revealing and disheartening view of a flawed legal precedent."
—Rocky Mountain News