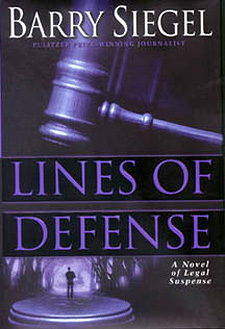 Now that an influx of upscale chain stores and luxury housing has turned sleepy, fog-bound Chumash County into a boom town, the last thing anyone wants is crime casting a shadow over the prosperity. So when a devastating house fire claims the lives of a kindly local retiree and his eleven-year-old piano student, District Attorney Angela Stark wastes no time declaring the blaze a mishap. The verdict, though, just doesn't sit right with Sheriff's Detective Douglas Bard. Inconclusive but troubling clues—marks on the dead girl's neck, a strange bootprint on a kicked-in door—are enough to make the maverick detective once again buck the party line in this isolated reach of the Central California coast.

Then a suspect surfaces—Jed Jeremiah, a backwoods loner with a possible homicide in his past. The DA quickly arrests him, but Bard still isn't satisfied. The same instincts that told him there was foul play afoot now convinces him that the wrong man faces the death penalty—and that a calculating killer remains at large.

Defying the sheriff and the DA, putting his job on the line, Bard begins to dig for the truth. What he discovers is a shocking link to his own past—a link that at once draws him close to the people he loves most, and puts them in deadly jeopardy.

From crime scene to courtroom, Lines of Defense unravels a cunningly plotted tale of detection and justice. Michael Connelly has declared, "with Barry Siegel you don't read a story. You feel it. You live it. And you always want more." The third novel by the acclaimed author of Actual Innocence and The Perfect Witness brilliantly proves him right, on all counts.

"Barry Siegel's Lines of Defense lays out the ravages and raptures of prosperity. It's urbanization and gentrification time in La Graciosa, a small town inland from California's Central Coast, not far from San Luis Obispo... The setting is vivid with local color, parochial politics, corporate and community meddling and muddling, and personal travails for all involved. There is a lot of driving, mostly on winding roads through the late night and early morning fogs that grace the area; and there's a lot of soul-searching about personal and legal ethics. Complicated and compelling, Siegel's yarn provides amateurs of legal drama with plenty of suspense."
—Eugene Weber, Los Angeles Times Book Review

"Engaging legal-suspense about a sheriff's detective and a case too troubling to call. Lines of tension emerge at once as Los Angeles Times reporter Barry Siegel brings a slate of sharply etched characters onto the scene of a house fire in the mid-California coastal village of La Graciosa... The case is driven by the characters' personal connections to it, by their past historics—by the lines of defense they construct for their actions. Justice becomes not an abstract issue, but a force buffeted by the emotions and ambitions of fallible men and women."
—Kirkus Reviews

"The balls are kept in the air, and the real villain is a genuine surprise."
—Publishers Weekly

"Los Angeles Times reporter Barry Siegel follows up his two previous legal thrillers—The Perfect Witness (1998) and Actual Innocence (1999)—with something of a change of pace. The setting is the same, La Graciosa, California; the writing is excellent, as always. But where is Greg Monarch, the attorney-protagonist of the previous novels? Retired, Siegel tells us, and living near Puget Sound. Stepping in as lead character is Douglas Bard, a detective on the local police force, whose suspicions about the supposedly accidental deaths of a schoolteacher and one of his young female students lead him into very deep, dark waters... Siegel quickly makes us forget Monarch and cheer for the new guy, a determined and shrewd investigator who only takes "no" for an answer when it suits him. It would be nice to see these two characters team up; until that happens, we look forward to more Bard adventures."
—David Pitt, Booklist